If you've ever owned a blender that died on you after a few uses or found the blades simply couldn't cut it, you may want a Vitamix 750 blender. Some blenders look great on the outside, but once you start using them and putting them through the usual paces, they just don't measure up to the task. It's incredibly frustrating to wake up in the morning and not be able to make your breakfast because your blender broke. Step in the Vitamix 750 series blender.

The Vitamix 750 is sleek and sturdy. It has a solid base and multiple options for blending. It is also costly, but is it worth it?

The Vitamix 750 has pre-programmed settings for you to choose from, based upon what you're blending. Whether it's your favorite smoothie, soup, protein shake, or pureeing dishes, there's a programmed option to choose. It features a sleek metal exterior body, which won't rust or fade in color over time. It is also available in your choice of two-color finishes, so you can accentuate your kitchen, and pair it alongside the rest of your appliances accordingly.

Also, the blender is extremely easy to clean. In fact, it has a self-clean feature so that you don't have to worry about losing a finger on its sharp blades. A low profile 64-ounce blending container makes it easy to prepare a single drink, or prepare smoothies for the entire family quickly and easily.

Meal prep has never been easier either. Puree, blend, froth, or smash/mix your favorite ingredients in no time. You can get rid of your old food processor, chopper, and dated appliances, as the Vitamix 750 is capable of doing all of those jobs.

You're considering if you should finally spring for a commercial-grade blender. And, the Vitamix 750 is the one you're considering. Let's see how it stacks up against those $20 blenders you've owned in the past.

Its commercial-grade motor features 2.2 peak horsepower blending capabilities, operating on 120 V, and producing approximately 1650-watts of power. The blender features an airflow design making operation more efficient while increasing performance. It isn't as loud as other appliances either. Its noise-reduction capabilities mean that even though it delivers on power, it isn't overbearing.

The blending container is large, short, and compact. It is easier to store away in cabinets in comparison to "classic" or taller containers. Additionally, it has more capabilities than average blenders. For example, you can place more ingredients and liquids in the blender enabling you to prepare drinks for a larger crowd. A nice sub-set feature of the blender is that it offers both preset and variable speed control options. That gives you more leverage if you want to pulse, or prefer a thicker consistency with foods or beverages. The pitcher is also BPA-free, so no harmful plastics are used in production.

The Vitamix's blades are stainless-steel. They operate efficiently, deliver more power than coated blades, and won't wear out over time. Because of the wider container/pitcher base, it can use 4-inch blades, as opposed to 3-inch blades used in ordinary blenders. Finally, as mentioned above, it automatically cleans itself in 30-60-seconds, so you don't have to do the heavy scrubbing after use.

Vitamix 750: Price and Where to Purchase

The Vitamix 750 blender is available for purchase directly through the company website. Amazon, Williams-Sonoma, and Best Buy are also a few online retailers that carry the mixer. It can be purchased for between $600 and $700, depending on where you buy it.

How Does it Compare?

The Vitamix 750 isn't the only highly touted blender available on the market. Below are some of the other fantastic blenders.

The Ninja Chef Countertop is a 1500-watt blender that features an Auto-IQ base. That includes a total of 10-preset options to choose from, so you don't have to guess how much power or how long to hold the pulse button when using your blender. It features a sizeable 72-ounce container, tamper, and a vented-lid. That allows you to easily pour beverages into a smaller cup or container, without spilling them all over the place.

Some of the benefits include the ten manual mode speeds and variable speed control. That allows you to control and customize the beverages you're creating the perfect consistency. Like the Vitamix, it features a self-cleaning mode. With the touch of a button, you can set the auto-clean function.

Some owners do have a few complaints that should be noted as well. The suction cup feet make it difficult to move. If you're cooking and need to move the blender to create additional counter space, it is difficult to remove once stuck into place. Owners also complain that the "intelligent" or IQ features aren't as intuitive as one would hope. They do help in some instances, but aren't perfect for all dishes or drinks being blended, making the variable speed control easier to work with.

The Ninja Chef Countertop is, however, a fraction of the cost of the Vitamix and it has 4.4 out of 5-stars on Amazon. 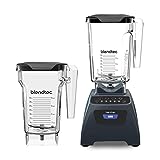 This blender features a programmed smoothie cycle, allowing you to make the perfect smoothie everytime you use the blender consistently. It has an auto-clean cycle option. You merely put soap and warm water in the blender and select the preset button to clean it after use.

There is an LCD timer display that counts down the time left for blending smoothies once you choose the preset setting. The four-side jar is better than a rounded blender container, as it generates more friction when blending. You can use the jar for preparing cold liquids, as well as hot foods like soups or gravies. An intuitive touchpad lays out all of the settings and makes it easy for choosing the blending options on your blender. It produces up to 13 amps of power and reaches up to 3 horsepower speed at the highest blend setting.

Some cons also exist, one of the most notable being the high price-tag. Owners also complain of how noisy the blender is when operating, which is louder than similarly designed blenders. Owners claim the touchpad panel, although it is more intuitive, might eventually begin to falter as the blender ages. Overall though, it has great reviews and is rated 4.7 out of 5-stars on Amazon.

Lastly, for the price conscious shopper, the AIMORES heavy-duty blender is another option to consider when comparing it to the Vitamix 750. It features a 3-in-1 programmed commercial high-speed blending capacity. The large jar is 75 ounces, allowing owners to prepare drinks for several guests at once. It features 6-blades for efficient and quick blending, and it is ETL and FDA approved for use.

Among the main benefits, owners discuss the fact that it features a 7-in-1 design. You can grind coffee, use it as a juicer, make smoothies, soy milk, and other function/settings. There are six-programmed speeds and six other programmed options to choose from, based upon what you're blending at any given time. The blender container is BPA free and utilizes 100% hardened, stainless-steel blades, for efficient chopping, dicing, and blending, in a compact design.

There are also complaints owners express about the blender. For thicker batches, such as cookie dough or other foods of similar consistencies, there isn't a preset setting, and the blades aren't powerful enough to handle the kneading of thicker ingredients. Some owners also complain it isn't as powerful as they'd expect, given the settings and power variable modes. It is very noisy, and cumbersome when it comes to cleaning the blender.

It is, however, one of the more affordable options in comparison to other high-powered blenders. Overall people like it and have rated it 4.5 out of 5-stars on Amazon.

Pros and Cons of the Vitamix 750

When comparing blenders, you must consider the pros and cons of the Vitamix 750 blender before deciding if it is the best blender. So, here are some of the aspects to consider when determining if it is worth the investment.

There's virtually no guesswork when it comes to using the Vitamix 750 blender. It is highly efficient and will reduce your prep-time in the kitchen immensely so you can free up your time for more important things. The built-in safety mechanisms also make it perfect in households where kids love to help in the kitchen. You don't have to worry about injuries when you turn your back for a second.

Powerful performance is a given when it comes to the Vitamix 750 blender. There are several other benefits that make it a top contender for the next blender you plan on investing in as well. Among these are:

Some negatives also exist that consumers must consider when discussing the Vitamix 750, commercial-grade blender. The most obvious being the high price-tag for the blender. Additionally, some drawbacks include:

Vitamix has been a name synonymous with quality and a powerful performance in kitchen appliances for many years. It is a reliable name, delivers on power and precision, and is guaranteed to reduce prep-time in the kitchen. If you're looking for quality design and a reputable brand name, you can't go wrong with the Vitamix 750.

We suggest the Vitamix 750 blender for owners who plan on preparing larger dishes or using the blender to make large volumes of liquid. It is more powerful than competitors on the list, blends efficiently, and is quieter in operation than other blenders. The blender also has many features you won't find with lower-priced blenders, making it a good choice for avid cooks. If you want to eliminate smaller appliances in the kitchen, the blender is also worth the price you're paying. A 10-year warranty also backs it, so you know quality won't diminish over time.

If you can afford it and plan on using the blending features, the Vitamix 750 is one of the best blenders for the cost.

Blendtec Total blender: Everything You Need to Know About

In Your Blender In Your Inbox