The market for blenders is massive, and it can be hard to tell the difference between the various models on offer. The Ninja Professional blender has been getting a lot of attention lately. And a high functioning, reliable blender for under $$ is always worth getting excited about -- and exploring further. On the surface, the Ninja Professional looks great. It's a large capacity, 72-ounce blender with the power to match. With three rows of stainless steel blades, one would think it would make quick work of everything from fruit smoothies to chopping vegetables. But does it live up to its reputation? And how does it compare to the competition?

What is the Ninja Professional Blender?

The Ninja Professional Blender is a tough, high-quality blender for home use. It features a powerful 1000-watt motor, an extra-large, dishwasher-safe 72-ounce jug of BPA-free plastic, and its proprietary "total crushing technology," which is put forward as the real selling point.

Overall, customers have been pleased with the combination of affordability and reliability that this blender offers. Amazon reviewers gave the Ninja Professional Blender an average of four out of five stars.

One Target customer reviewer had a recipe which required a Vitamix, but they didn't sit within her affordability range. So after burning through many blenders, she took a chance with the Ninja NJ600. It did the job for her, flawlessly. She reported being able to blend up whole onions, zucchinis, leeks and raw cashews - something that other blenders had failed to do. The large capacity jug made this easy, and she highly recommended the Ninja Professional blender.

Another Target reviewer called this blender "a dream come true." She was after a blender that would finely crush ice for frozen drinks, as well as make vegetable smoothies without lumps. She already had a bullet-style blender that she was happy with, but wanted a stronger and larger blender. Her only criticism was that she would have preferred a glass canister, rather than plastic.

The area where it loses points and receives criticism is regarding the precision of blending. Some say that this blender does not provide entirely consistent, perfectly smooth or pulp-free results.

One critical review from a Target customer said that if you're looking for an inexpensive blender that can make smoothies with green, leafy vegetables, the Ninja Professional blender is not it. They reported that this blender chops quickly, but leaves a lot of chunks. Another customer reported that their green smoothies ended up "pulpy" and "chewy." They considered the Ninja Professional blender to be "overpriced for a mediocre blender."

How Much Does It Cost?

You can buy the Ninja Professional Blender from a series of online outlets, and we listen some below. The average price range is $$ to $$. You can find this blender at Amazon, Walmart, Target, and Kohl's.

How Does It Compare With Competitors?

Honestly, this question could have two answers.

Compared to lower-end of the range blenders, the Ninja Professional Blender leads the way. Brands such as Hamilton Beach and Kitchen Aid provide cheaper appliances with similar levels of reliability and power. However, there is a huge difference in jug capacity and resulting use-range.

If you're happy to spend almost double the price and invest in a long-term professional blender, brands like Vitamix or Blendtec provide lines of powerful, reliable blenders with extended warranties. The blades are, comparatively, more capable. There's also the bonus feature of an induced vortex, which pulls ingredients down toward the base. The downside is that you’re generally looking at a price of $$$ and up.

While the Ninja Professional blender will not achieve the same results or high-quality consistency as the more expensive models, you can take measures to achieve similar results. This includes adding more water or just taking the time to chop ingredients more thoroughly before blending.

We reviewed and compared this item by scouring the web and averaging out over 3,000 customer reviews from major retailers such as Walmart, Target, and Amazon. To save you some time and make your life a little easier, we’ve also put together some key points of comparison below:

This five-speed Kitchen Aid blender is another attractive option for blenders under $$$. First, you get the Kitchen Aid name and solid metal construction. The pitcher is substantially smaller than that of the Ninja Professional blender -- 60 ounces instead of 72.

However, it comes with a limited five-year warranty, and that's a big promise. Over 1,200 Amazon reviewers give this model an overall score of 4.1 out of five stars. 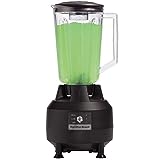 Hamilton Beach blenders seem to come at two different price points, relative to the Ninja Professional blender. They're either substantially cheaper or substantially more expensive. This two-speed blender is one of the only ones to come in at around the same price.

Customers liked it overall, giving it an average of 3.5 out of five stars. However, you will sacrifice performance and capacity. This model has fewer speeds than the Ninja, and the 44-ounce jug has a little more than half the capacity of the Ninja's 72-ounce jug.

The NutriBullet Pro is feature-rich and has a lot of customer love -- over 3,000 reviews' worth. You get a lot for a blender under $$$, including a massive accessories package and a recipe book.

The 900-watt engine isn't as powerful as the Ninja Professional Blender's 1000-watt engine. However, you get a lot for your money, and customers love it.

The Braun JB7350 WHS is another popular model that comes in at just under $$. The motor has the same power as the Ninja Professional blender -- 1,000 watts -- but has more speed and program options.

There aren't as many customer reviews, but no one who purchased this model from Amazon gave it fewer than four stars.

We’ve already covered some of the most obvious pros, but we’ll go into a little more depth here. It’s always important to also closely examine the cons. With a budget blender like this, there are bound to be some, but consumers are bothered by different things. It’s important to take a holistic view and then weigh up your own cost-benefit decision.

Ultimately, we feel the Ninja Professional Blender deserves a four-out-of-five star rating. This is a sentiment echoed by over 2,500 Amazon reviewers. Wal-Mart reviewers rated this product 4.5 out of five stars, as did Target purchasers.

The blender is wonderful as a large-sized budget blender. For the low pricing offered, the features definitely stack-up -- and then some.

With a limited budget, you will be happy with this purchase decision. The Ninja Pro Blender appears to be a great blender - solid quality that doesn’t cost the earth.

Blendtec Total blender: Everything You Need to Know About

In Your Blender In Your Inbox